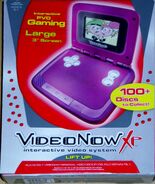 Add a photo to this gallery

The VideoNow XP is an interactive video system by Tiger Electronics in 2005. This version has interactive features as well as a larger screen. This is the most advanced model. Also, XP stands for Xtra Play.

This player can play all black & white and color PVD's (personal video disc). PVD's made in 2005 have interactive games about the included episode (mostly trivia games) while only three games have just the interactive game and no episodes: The Batman, What's New Scooby-Doo?, and Teen Titans.

Retrieved from "https://videonow.fandom.com/wiki/VideoNow_XP?oldid=4876"
Community content is available under CC-BY-SA unless otherwise noted.